The Slow Death of Linear Marketing

[dropcap2]I[/dropcap2]n the last 10 years, the Internet has broken all the “traditional rules” of marketing and consumer behavior.In the past, the traditional, linear, one-way path of companies promoting their products worked well with consumers receiving the messages. Back then, because of the limited number of marketing channels, the only thing companies could focus on was getting more eyeballs. And because of the linear nature of consumer reaction, that would usually be enough to influence consumers into purchasing the product.

And while the traditional marketing model had to worry about just reaching more Eyeballs, today the Internet ready consumer can get any number of different information at the snap of a finger:

And perhaps most startlingly, today companies look for just not consumers on the Internet – but also contributors who can create content and sway opinions of other consumers towards the product in question.

The Disconnect Between Consumers & Marketers 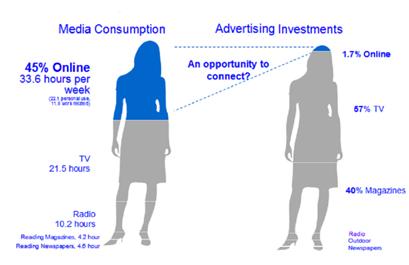 Even though the Internet is the most popular activity of shoppers, the advertising investments are disproportionately low.

A Google / Johnson & Johnson survey in January in 2009 year found that consumers in spend 45% of their time online – a 50% increase on the next most common activity (television). Yet, companies spend only 1.7% of their budgets on online media, while a disproportionate amount goes to television and magazines. This represents a huge opportunity to find the balance and utilize all the time users spend on the Internet for marketing products.

In country after country, the two most popular sites are Google and Facebook. And while Google has been building up its dominance in the search engine space over 10 years, Facebook’s rise has been meteoric in the past 3 years.

According to Hitwise’s Singapore stats, Facebook takes the top spot in Singapore (it’s number 2 globally) and Google takes the #2 spot in traffic. And that’s not the end of it – both these websites still have a year-on-year growth that’s far ahead of other websites in the top 50.

In many ways, online marketing in 2010 has become synonymous with having a strong presence on Google and Facebook.

In conclusion, we need to focus on establishing a strong visibility and getting traffic from these websites.

As Singapore’s first Qualified AdWords Professional and one of the first Analytics Qualified Professionals in the region, Rachit has been on the forefront of search marketing in Singapore since 2004.

But as this industry comes into maturity, he believes now is when the fun is starting – when clients dare to dream of exciting campaigns, and we can finally show tangible positive ROI from all marketing campaigns.